Update: I got covered by c|net’s Tomorrow Daily!

@hallublin I would love for you to have one! It will need some more work to be entirely…reliable.

Note: If you commented on this post and your comment is missing, I'm very sorry; A technical glitch caused me to lose all the comments. Please comment again!

One of my favorite things in the world is The Thrilling Adventure Hour (TAH), a stage production in the style of old-time radio, performed live on stage, and recorded as a podcast. I fly to LA once a month to see the live show, wherein actors stand on stage at microphones, scripts in hand, performing episodes of different story lines. The evening usually begins with an episode of "Sparks Nevada, Marshal on Mars," and ends with an episode of "Beyond Belief." There is a rotating story's episode in the middle, and a couple of fake sponsor ads thrown in. They have surprise guest actors (often well-known from TV or movies), and then the entire cast and crew spend time after the show to chat with audience members. It's funny and fun, and I wouldn't miss it.

One of my friends (who often sees the show with me) has a father who collects old radios. This got me thinking about what it was like before television, how people gathered around their radios to listen to radio plays. What if you could listen to The Thrilling Adventure Hour on an old radio?

As it turns out, it's very common to modify old radios to accept an auxiliary input for an MP3 player. With these modifications, whatever the MP3 player outputs is amplified through the vacuum tubes of the old radio and played on the old speaker.

But I wanted something different. I wanted to turn the tuning knob to "tune" in different podcasts. In the case of TAH, there would be "stations" for Sparks Nevada, Beyond Belief, Jefferson Reid, and so on. They have a lot of music in the show, too, so there'd be a station of TAH music. So, I built this: 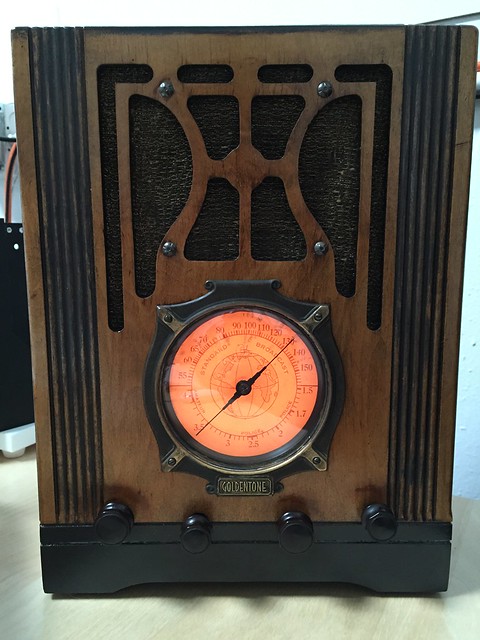 Video of it in action:

I call it "Podtique", an amalgam of "podcast player" and "antique radio." I took a 1936 Goldentone radio purchased on eBay, removed the old tube radio and speaker, and replaced them with a laser-cut wooden structure that contains a BeagleBone Black and audio components. Potentiometers attached to the knobs on the front are connected to the BBB's analog-to-digital converters, and code on the BBB uses that to simulate tuning to different radio stations. 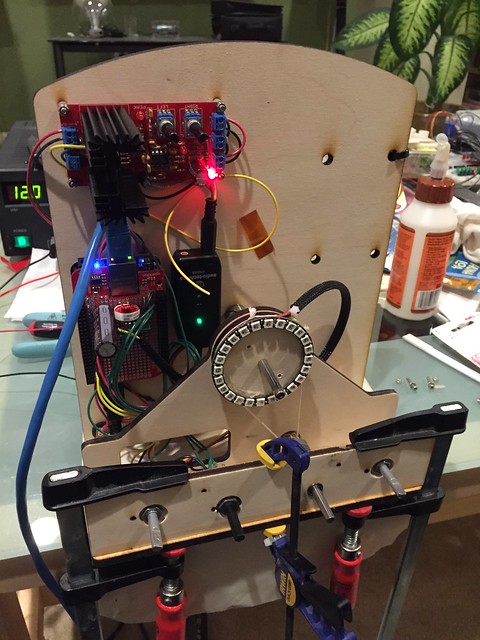 As long as it's powered, the BBB runs the radio simulator. The left knob contains an on-off switch and volume control. The third knob is the tuning control. The other two knobs are currently unused.

Each "station" is a playlist of MP3 files stored on the BBB. The tuning knob is attached to a five-turn potentiometer, giving fairly fine-grained tuning control to the user. As you approach the designated frequency for a station, the appropriate MP3 file is opened and begins decoding.

Whenever you're not tuned to a station, pink noise plays. This is mixed with station content, gradually fading away as the tuning improves. The volume potentiometer is used to attenuate the resulting mixed samples. If the knob is turned all the way off, the BBB mutes the audio amplifier and turns off the dial backlight.

I used a SparkFun Proto Cape to wire in the potentiometers and add the electronics for interfacing with the audio amplifier and AdaFruit NeoPixel Ring 24. The NeoPixels introduced horrible, horrible noise into the audio, so I experimented with LC filtering until I was able to attenuate it fairly well, and added that to the Proto Cape, as well. The audio codec is an Audio Technica ATR2USB purchased at Fry's. A SparkFun Audio Amplifier and 4" speaker from Fry's round out the audio components. There's a giant R/C lithium-polymer battery pack hacked into it so I can demo this without being plugged in. A cheap DC-DC converter provides 5V from a wide input range (the amplifier needs 9-24 V). A 12 V switching wall wart adapter provides power (and its own share of noise, but nothing compared to the LEDs).

I'm working on a fully-custom BeagleBone Black Cape that will integrate audio DAC and amplifier, LED interface, power regulation, and battery charging. Hopefully this won't have the noise issues, will be much more compact, and easier to use. If there's any interest, I'll manufacture and sell them. The software is available on GitHub.

The software runs on Debian and OS X. It uses libao for audio output, libmpg123 to decode MP3s, and C++11 features for threading. All that works well on Debian and inside a Cocoa app on OS X. On the BBB it uses LEDscape to control the NeoPixels (special thanks to Yona for making some changes to support a single NeoPixel string). LEDscape relies on prussdrv to handle the strict timing requirements of the NeoPixels.

Mechanically, it was necessary to duplicate the linkage between the tuning knob and the frequency indicator dial. In the original radio, this was accomplished by a pulley system. A thread wrapped once around the knob's shaft went to a fairly large metal pulley on the indicator dial's shaft. This was also connected to the variable tuning capacitor. The original system had a turn ratio of about 14:1.

In order to get good sensitivity with the knob, it was easier to put a five-turn potentiometer on the knob, and cut an appropriately-sized pulley for the indicator shaft. In the end, the ratio is a bit wrong, and the indicator goes past the dial at the extremes of the pot's motion.

I learned a lot more about the Linux kernel than I ever wanted to know during this project. I'm still barely scraping by. I really do prefer OS X.