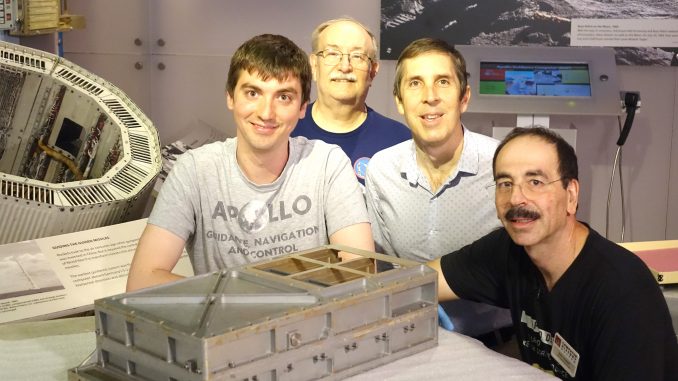 Over the last few months, a small team has made incredible progress in restoring an Apollo Guidance Computer, the first computer ever built using integrated circuits. I’ve followed along with their progress via hours of YouTube videos, and I couldn’t be happier with the results.

It wasn’t long before I really wanted to build my own simple computer out of discrete logic, and I’ve settled on trying to create an accurate realization of an Apollo Guidance Computer using semi-modern logic. By that I mean I want to make it out of discrete logic ICs, rather than an FPGA as Mike Stewart did for their AGC restoration effort. But I don’t want to try to implement RAM from flip flop arrays or anything like that, and I’m not above using some programmable logic devices to simplify some of the glue logic. Since PALs and GALs are hard to come by these days, I’ll use something like Microchip EPLDs. And rather than build on a breadboard, I’ll be making this on a four-layer PCB. There will be LEDs to reveal some of the inner workings of the system, and compatible interface ports to allow inserting it into the simualtion rig the AGC restoration guys used. I probably won’t be able to get the custom pins they had to re-create in order to allow plugging into their real AGC, but I’ll try to leave room for them on the board.

This will be one more in an endless series of overlapping projects that rarely get finished, but it’ll be fun while it lasts. And it seems perfect for the theme of my new channel, Questionable Engineering Decisions.